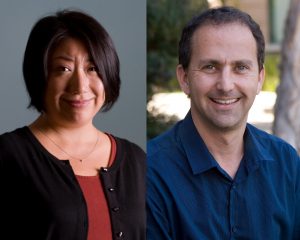 Molecular Biology and Biochemistry Professors David A. Fruman and Sheryl Tsai have been named fellows of the American Association for the Advancement of Science (AAAS).  The AAAS is the world’s largest general scientific society, serving 10 million individuals in more than 90 countries around the globe.  It is a multidisciplinary scientific society that seeks to “Advance science, engineering and innovation throughout the world for the benefit of all people.”

Professors Fruman and Tsai will receive an official certificate and a gold-and-blue rosette pin on Feb. 18, 2017, at the organization’s annual meeting in Boston.  The new School of Biological Sciences AAAS fellows, and all of the 2016 inductees, were formally announced Nov. 25 in the AAAS News & Notes section of the journal Science.

“I am honored to be selected as AAAS Fellow. I have been studying PI3K signaling for 20 years and it is wonderful to be acknowledged by peers for our work on this important cellular pathway.  Moreover, I am gratified that our studies have contributed to both basic knowledge and translational application in this field,” said Professor Fruman.

“The AAAS Fellow really is a celebration of research excellence of both graduate and undergraduate students of Bio Sci, and students from Minority in Science are essential for our contribution. We investigate how nature produces important drugs called polyketides, which is widely used as antibiotic, anticancer and cholesterol lowering drugs, and the reason why drinking red wine and green tea is good for our health. I am very grateful that AAAS acknowledged our appreciation and subsequent application of nature’s strategy to generate drugs and biofuel,” said Professor Tsai