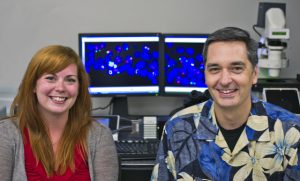 FOR IMMEDIATE RELEASE
FROM THE UNIVERSITY OF CALIFORNIA, IRVINE

Their study – which appears today in The Journal of Neuroscience – specifically identifies how immune system signaling molecules, called cytokines, impair communication among neurons in the hippocampus, an area of the brain critical for discrimination memory. The findings offer insight into why cognitive deficits occurs in people undergoing chemotherapy and those with autoimmune or neurodegenerative diseases.

Moreover, since cytokines are elevated in the brain in each of these conditions, the work suggests potential therapeutic targets to alleviate memory problems in these patients.

“Our research provides the first link among immune system activation, altered neural circuit function and impaired discrimination memory,” said Guzowski, the James L. McGaugh Chair in the Neurobiology of Learning & Memory. “The implications may be beneficial for those who have chronic diseases, such as multiple sclerosis, in which memory loss occurs and even for cancer patients.”

What he found interesting is that increased cytokine levels in the hippocampus only affected complex discrimination memory, the type that lets us differentiate among generally similar experiences – what we did at work or ate at dinner, for example. A simpler form of memory processed by the hippocampus – which would be akin to remembering where you work – was not altered by brain inflammation.

In the study, Czerniawski, a UCI postdoctoral scholar, exposed rats to two similar but discernable environments over several days. They received a mild foot shock daily in one, making them apprehensive about entering that specific site. Once the rodents showed that they had learned the difference between the two environments, some were given a low dose of a bacterial agent to induce a neuroinflammatory response, leading to cytokine release in the brain. Those animals were then no longer able to distinguish between the two environments.

Afterward, the researchers explored the activity patterns of neurons – the primary cell type for information processing – in the rats’ hippocampi using a gene-based cellular imaging method developed in the Guzowski lab. In the rodents that received the bacterial agent (and exhibited memory deterioration), the networks of neurons activated in the two environments were very similar, unlike those in the animals not given the agent (whose memories remained strong). This finding suggests that cytokines impaired recall by disrupting the function of these specific neuron circuits in the hippocampus.

“The cytokines caused the neural network to react as if no learning had taken place,” said Guzowski, associate professor of neurobiology & behavior. “The neural circuit activity was back to the pattern seen before learning.”

The work may also shed light on a chemotherapy-related mental phenomenon known as “chemo brain,” in which cancer patients find it difficult to efficiently process information. UCI neuro-oncologists have found that chemotherapeutic agents destroy stem cells in the brain that would have become neurons for creating and storing memories.

Dr. Daniela Bota, who co-authored that study, is currently collaborating with Guzowski’s research group to see if brain inflammation may be another of the underlying causes of “chemo brain” symptoms.

She said they’re looking for a simple intervention, such as an anti-inflammatory or steroid drug, that could lessen post-chemo inflammation. Bota will test this approach on patients, pending the outcome of animal studies.

“It will be interesting to see if limiting neuroinflammation will give cancer patients fewer or no problems,” she said. “It’s a wonderful idea, and it presents a new method to limit brain cell damage, improving quality of life. This is a great example of basic science and clinical ideas coming together to benefit patients.”

Guzowski and Czerniawski are part of UCI’s Center for the Neurobiology of Learning & Memory, which Guzowski directs. The National Institutes of Health supported their research (grants R01 MH08930 and AG00096).

About the University of California, Irvine: Founded in 1965, UCI is ranked first among U.S. universities under 50 years old by the London-based Times Higher Education and is the youngest member of the prestigious Association of American Universities. The campus has produced three Nobel laureates and is known for its academic achievement, premier research, innovation and anteater mascot. Currently under the leadership of interim Chancellor Howard Gillman, UCI has more than 28,000 students and offers 192 degree programs. Located in one of the world’s safest and most economically vibrant communities, it’s Orange County’s second-largest employer, contributing $4.3 billion annually to the local economy.

Media access: UC Irvine maintains an online directory of faculty available as experts to the media at today.uci.edu/resources/experts.php. Radio programs/stations may, for a fee, use an on-campus ISDN line to interview UC Irvine faculty and experts, subject to availability and university approval. For more UC Irvine news, visit news.uci.edu. Additional resources for journalists may be found at communications.uci.edu/for-journalists.