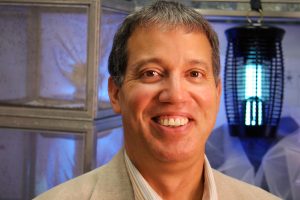 The Zika viral epidemic, which is currently afflicting several countries in Latin America, is the latest mosquito-borne illness to wreak havoc on humankind. Other mosquito-borne illnesses, like malaria and dengue fever, cause thousands of deaths annually.  Due to the challenges faced by diseases spread through mosquitoes, several institutions across the globe have worked diligently to created genetically modified mosquitoes as a method to fight disease transmission. Professor Anthony A. James, Distinguished Professor of Microbiology and Molecular Genetics and Molecular Biology and Biochemistry, has recently created a revolutionary malaria-resistant mosquito and has been approached by several news organizations, including The New York Times, to give an expert opinion on the potential use of genetically modified mosquitoes to combat the Zika viral epidemic.

“It would be straightforward to use a gene drive to spread something like a sterility trait through the Aedes aegypti population to kill them off.”

“We can build these things. It’s a question of what we want to do.”

The successful testing of genetically modified mosquitoes in the wild will help determine if these new tools will one day be used to fight the Zika virus.