Home In the news I Told You But You Don’t Listen: Male-Female Communication Gap Affects Plants 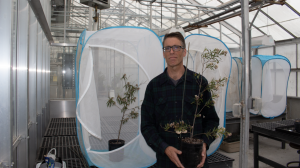 The conundrum of communication between the sexes doesn’t just perplex humans. Male plants turn a deaf ear to their female counterparts, even when their survival is threatened. This new finding comes from research led by Ecology and Evolutionary Biology Professor Kailen Mooney.

Professor Mooney and his collaborators discovered the communication gap in studying what happens when aphids feed on the plant Baccharis salicifolia, which is commonly known as mule fat. It belongs to the same family as the sunflower and abounds in wet areas around the UCI campus. Mule fats are either male or female in gender.

The researchers found that when herbivores munch on a mule fat plant, it tries to defend itself by increasing its immune system, making it less tasty to the herbivore. It also sends out a signal in the form of a scent that alerts nearby mule fats to up their immunity to protect themselves from the threat. While female mule fat plants respond to the odors from both female and male sources, male plants only react to other males, thus manifesting their own inimitable style of the male-female communication gap.

The research findings were recently published by the journal Ecology, and in February, Professor Mooney was featured in an NBC LA news segment.