Home In the news A Pair’s Power to Combat Disease  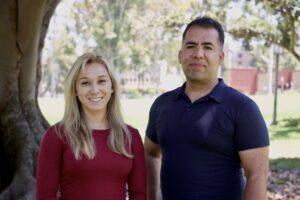 When it comes to fighting deadly cancers, as well as chronic infections such as HIV and hepatitis B, C, two is better than one. That’s the finding published by the laboratory of Molecular Biology & Biochemistry professor Dr. Roberto Tinoco. In researching ways to make immunotherapy more effective, the team found that blocking a pair of what are called immune checkpoints is more effective than blocking just one of them. Their discovery appears in Frontiers in Immunology.

The Tinoco lab has been examining why immune cells stop functioning correctly during long-term viral infections and tumor development, a phenomenon known as T-cell exhaustion. Understanding the mechanisms behind this problem is key to improving immunotherapy.

In this investigation, the team centered on immune checkpoints, molecules which regulate immune responses and have been linked to T-cell exhaustion.  Immunotherapy uses checkpoint inhibitors to stop those molecules from diminishing T cells’ ability to fight pathogens.

“What’s been seen in the clinic is that if you block these immune checkpoints alone, some cancer patients do very well but the majority don’t respond to treatment,” said first author Karla Viramontes, a Ph.D. student in the Tinoco lab. “We wanted to find a new way to target two immune checkpoints to help increase T cell function.”

The researchers took a close look at these two immune checkpoints: a protein called PD-1, short for programmed cell death protein-1, and the glycoprotein PSGL-1, or P-selectin glycoprotein ligand-1.

“We discovered that when we blocked PD-1 and PSGL-1 together, there was a synergy that created a better immune response in the helper and killer T cells,” Viramontes said. “This strategy helped the T cells be even better killers of virus-infected and cancer cells.”

Professor Tinoco said: “We now hope to collaborate with UCI investigators and clinicians who can provide patient HIV and hepatitis B and C blood samples. This would allow us to obtain T cells to study the PSGL-1 pathway and look at how this could translate to humans.  When immunotherapy works, it works really well. Our collective goal is to make these treatments effective for many more people.”

How a protein breaks free to cause deadly cancers