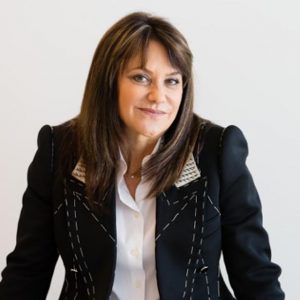 After obtaining her Ph.D., Dr. Hronis-Nova worked as a postdoctoral scholar in the Departments of Dermatology and Ophthalmology at the New York University Medical Center before entering the Biotech industry.  Since her transition, Dr. Hronis-Nova has been a successful scientist, manager and entrepreneur in the Biotech world.  Before arriving at Molecular Stethoscope, Dr. Hronis-Nova was the Co-founder of Genoptix Medical Laboratory, where she held leadership positions as CEO, President, and Director.

“During the past several years of my career, I’ve had the opportunity to work closely with venture capitalist to build successful start-ups like Genoptix.  Upon reflection of these achievements, I am thankful for the knowledge and work habits that I picked up while at UCI.”

Prior to founding Genoptix, Dr. Hronis-Nova spent several years working senior technical and managerial positions at Nanogen, Ligand Pharmaceuticals and Hybritech, Inc.  Her success and hard work has been recognized over the years by her peers and colleagues.  She has been invited to serve on several company boards, including as Vice Chair of the Rady Children’s Hospital Pediatric Genomics and System’s Medicine Institute, and on governmental science advisory committees.  She has also received several awards for her contribution to the Biotech industry, including an Ernst & Young Entrepreneur of the Year Life Sciences award, a Tullis Funds CEO of the Year award and the prestigious Athena Chairman’s award for Lifetime Achievement.  Dr. Hronis-Nova was also named one of the Top 10 Women in Biotech in 2011, by FierceBiotech.

Presently, a successful and well respected executive, Dr. Hronis-Nova grew up the oldest of four kids on a farm in central California.  She recalls enjoying science at an early age and wanting to become a doctor when she got older.  When it can time to plan for college, she was intrigued by the maturing UC campus in the city of Irvine.  “UCI was my first choice and I was thrilled when I learned I had been accepted.” As an undergraduate, Dr. Hronis-Nova’s time at UCI was no different than what many students experience today.  She lived in the dorms, spent time in between classes in Aldrich park and participated in undergraduate research.

When asked what advice she would give to current School of Biological Sciences students, Dr. Hronis-Nova replied, “I would tell them to keep an open mind while you’re at UCI. I began college planning on going into medical school, but after a wonderful experience working with two expert scientist, I decided to pursue a career in research.  I would also remind them to never let obstacles get into the way of your dreams.  It hasn’t been easy being a female executive in Biotech, but success follows hard work, both in school and in life.”