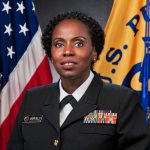 Wanda Barfield M.D. M.P.H. (B.S. ’85) thought she would devote her career to animals. However, undergraduate volunteer service in a hospital changed her focus to humans. It was a shift that would take her far: Dr. Barfield is now Director of the Division of Reproductive Health within the National Center for Chronic Disease Prevention and Health Promotion at the Centers for Disease Control and Prevention, or CDC. She is also the Assistant Surgeon General for the U.S. Public Health Service.

When she arrived at UCI as a freshman, she planned to pursue veterinary medicine. “But during my junior year, I had the opportunity to volunteer in the neonatal intensive care unit at a nearby hospital. I began to get a real-world view of the importance of the science I was learning at UCI as it applied to the care of critically ill and premature newborns.” The experience led her to switch her studies to human physiology.

She relished her academic experience. “I really enjoyed the biological sciences program at UCI, particularly chemistry and organic chemistry. I worked at UCI’s Tutorial Assistance Program and was a note-taker for many of the classes in Bio Sci. As I learned science at UCI, I knew that I wanted study human development.”

After graduating from UCI, she received a medical and public health degree from Harvard’s Medical School and School of Public Health. She completed a pediatrics residency at Walter Reed Army Medical Center and a neonatal-perinatal medicine fellowship at Harvard’s Joint Program in Neonatology (Brigham and Women’s Hospital, Beth Israel Hospital, and Children’s Hospital, Boston).

“My career path after medical school was a bit atypical. Since the Army paid for my medical school tuition, I was required to serve as a physician in the Army Medical Corps. Since I already knew that I wanted to become a neonatologist, I decided that I would serve as a neonatologist rather than as a general medical officer or general pediatrician.”

Dr. Barfield practiced for four years as a neonatologist and Army Major at Madigan Army Medical Center in Tacoma, Wash. The assignment gave her the opportunity to assist in global health missions and military training exercises. It helped her prepare for her current position within the CDC. Since joining the CDC, Dr. Barfield has been promoted to Rear Admiral and the position as Assistant Surgeon General in the U.S. Public Health Service.

“I loved serving in the military, particularly military families, but I truly had a passion to help those without health resources,” she said. “I transferred to the U.S. Public Health Service after being selected to CDC’s Epidemic Intelligence Service.”

Her advice to current students: “Follow your passion. Hopefully, there will be a long path in your chosen profession and you should enjoy the ride.”