Home Newsletter Can We Predict Death? 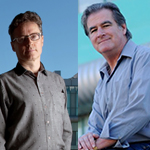 The groundbreaking work of Ecology and Evolutionary Biology Professors Laurence D. Mueller and Michael R. Rose was recently featured in an online BBC article.  Professors Mueller and Rose have spent over two decades studying the biology of aging to shed light on the slowing of mortality rates at older ages, a phenomena known as the “third phase of life.”  Together with their colleagues, Mueller and Rose identified a new fourth phase of life using Drosophila fruit flies, which they called the “death spiral”.  They have spent the past few years studying this fourth phase of life with the hope that their work with fruit flies might reveal ways to stave off the “death sprial”, so that the spiral begins just a few days before death, rather than a few months or weeks. Read more here.