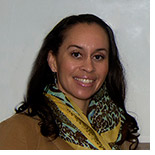 Biological Sciences School alumnae Jasmine Jefferson will never forget her undergraduate animal physiology research. “Have you ever thought about how hard it is to train a Savannah monitor lizard to run on a treadmill?” she joked. “It actually isn’t too hard, but they do need motivation in the form of a finger gently poking them.”

Jasmine came to UC Irvine after researching the course offerings and the frequency of core courses for the biological sciences major. She shares that she was amazed by the breadth of science classes offered at UC Irvine and although the quarter system runs at a fast pace, it allows you to explore more electives and take advantage frequent core course offerings to complete your degree program on time. She adds that her decision to attend UCI could not have been made any easier after discovering that the mascot was an anteater. ZOT!

“My education from UCI set the stage for my entire career path. From teaching 8th grade physical science, to my current role as a criminalist and forensic quality assurance manager, I have used even the most obscure aspects of my B.S. in Biological Sciences,” Jasmine said. She has been working in crime labs as a criminalist for 14 years and said that she often refers back to the foundational education in discussing scientific principles and techniques, and learning new methods and procedures. She adds that her ability to critically review scientific articles has been critical to forming scientific opinions she renders during court testimonies. She shares that during one case, she was working as a forensic alcohol analyst and provided expert witness testimony in the area of alcohol impairment and the effect on driving. “I relied on information I learned in my Physiology, Psychobiology, and Neurobiology of Alcohol courses, and was delighted to be able to directly refer to my education during courtroom proceedings,” Jasmine added.

She also stated that while pursuing her Master of Science degree in Criminalistics, it was necessary to refer back to everything she learned during her undergraduate degree including General Chemistry, Organic Chemistry, Biochemistry, and Physics. Criminalistics and crime laboratory work incorporates scientific principles from a variety of disciplines during the examination and analysis of evidence related to crimes. Having the strong and comprehensive scientific foundation in science that UCI provides was paramount to my success graduate school and in my career as a forensic scientist.

“I want undergraduates to know that I have found infinite value in my UCI education and the foundation of critical scientific thinking can applied to a vast number of careers, so stick with it.”