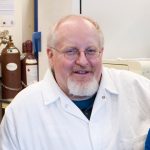 Chancellor’s Professor Markus W. Ribbe (Molecular Biology and Biochemistry) has spent his career at UCI uncovering the mysteries of the enzyme nitrogenase.  His research seeks to understand the basis of nitrogenase enzymatic activity, with the additional goal of using nitrogenase to generate alternative sources of fuel.  His lab uses a multidisciplinary approach to study the enzyme, which utilizes techniques in microbiology, biochemistry and structural biology to understand how molecules interact with nitrogenase.  He and his colleagues, including his spouse Professor Yillin Hu, have discovered that the enzyme can convert carbon dioxide and carbon monoxide into hydrocarbons, which are chief components of carbon fuels.  Professor Ribbe’s work will help shape future designs for biofuel production.

Since his appointment to the faculty at the School, Professor Ribbe has established himself as a leading figure in the study of nitrogen fixation and metallobiochemistry (the study of organic molecules that use metals as a key part of their functions).  Along with his success as a faculty scientist, Professor Ribbe has enjoyed serving as a teacher and mentor.  He has mentored over a dozen graduate students and postdoctoral scholars, and is extremely grateful for the hard work that his students have put in over the years.

Recently, Professor Ribbe’s passion towards education has led him and his graduate students, Megan Newcomb and Lee Rettberg, to create a new pilot outreach program called “Science Saturdays at UC Irvine (UCI).”  The program serves to educate students about the educational opportunities that exist for them while exposing them to life as a university student. Geared towards exposing middle school students from lower income areas to university research, the program has welcomed students from the Santa Ana Unified School District, where student population is largely Latino/Hispanic and low family income.