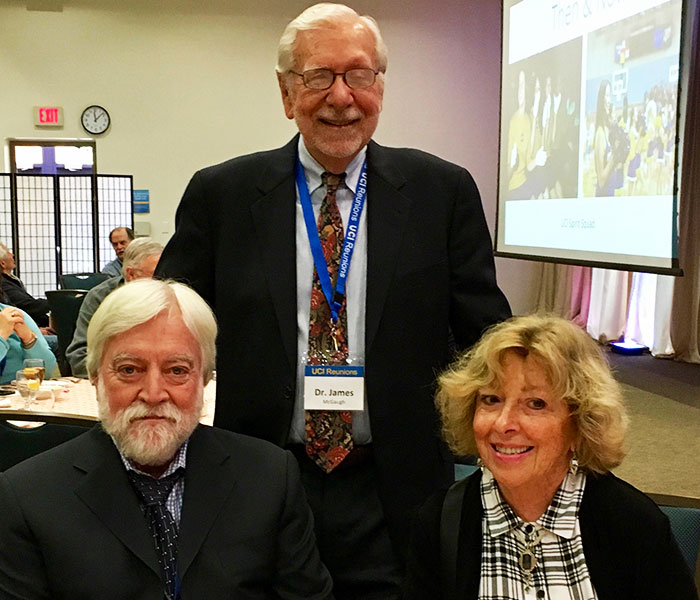 Dr. James T. Goodrich has led a highly successful career as a world-leading neurosurgeon. He is currently Professor of Neurological Surgery, Pediatrics and Plastic and Reconstructive Surgery as well as Chief of the Division of Pediatric Neurosurgery at the Albert Einstein College of Medicine in New York City, working at the Children’s Hospital at Montefiore Medical Center.

Of his most renowned achievements was the 27-hour surgery performed in 2016 to separate two infant twin boys conjoined at the head. He is considered the leading expert on what’s known as craniopagus surgery.

Dr. Goodrich and his wife, Judy, recently made a generous $60,000 gift to the School of Biological Sciences. The James Tait Goodrich Award for Excellence in Neurobiology in Honor of James L. McGaugh salutes his experiences as a UCI undergraduate studying under Professor McGaugh. The gift endows an award recognizing an undergraduate student completing his or her junior year for outstanding achievement in neurobiology.

Professor McGaugh joined the UCI faculty in 1964. He is currently Research Professor of Neurobiology and Behavior in the School of Biological Sciences and a Fellow of the UCI Center for the Neurobiology of Learning & Memory.

Dr. Goodrich’s ties to UCI and BioSci remain strong, including attendance at Professor McGaugh’s lab reunions when his busy schedule allows. He was also invited to present a keynote address at the 2017 UCI Reunions in which he shared how a high-school dropout could rise to full professorship at four academic institutions around the world and the role Professor McGaugh played in that success story.

As a teenager growing up in Oregon, Dr. Goodrich was a less than stellar student with a GPA of 1.42, but an interest in biology. After serving in the Marines during the Vietnam War, he attended Orange Coast College (OCC) and graduated at the top of his class with a perfect 4.0.

While at OCC, Dr. Goodrich attended a guest lecture by Professor McGough on learning and memory that made a strong impression on him. Upon moving to UCI to complete his undergraduate education, he made an appointment to see Professor McGough. The two hit it off, and Professor McGaugh became his mentor for two years.

“He has continued to be my mentor over the years,” Dr. Goodrich notes. “Because of him, I have concentrated on providing mentorships my whole career in medicine, and that includes people coming in from all over the world.”

Dr. Goodrich reports that Professor McGaugh treated him like a graduate student alongside doctoral candidates doing lab research and collecting data. The experience helped Dr. Goodrich earn a UC Regents scholarship in his senior year. With that solid foundation, he then went on to gain graduate and medical degrees at Columbia University.

“Professor McGaugh contributed to my growth and success in so many ways. Because of him, I was able to get into a great medical school and continue a wonderful academic career. His influence is still with me over four decades later,” said Dr. Goodrich. “Judy and I wanted to do something for the UCI community and do it in a way that would recognize this great gentleman and scholar.”