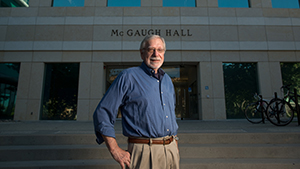 Irvine, Calif., Dec. 3, 2014 — UC Irvine neurobiologist James McGaugh, whose research has vastly contributed to our knowledge of the brain’s learning and memory abilities, has won the 2015 University of Louisville Grawemeyer Award for Psychology.

A research professor in neurobiology & behavior and a founding UCI faculty member, McGaugh is receiving the prize for discovering that stress hormones such as epinephrine and cortisol are key to why we remember some things more vividly than others.

The hormones activate the brain’s emotional center, the amygdala, which in turn regulates other brain areas that process and consolidate memories – a sequence that explains why emotional experiences are easier to recall, he found.

“His work has transformed the field,” said award director Woody Petry. “It has profound implications for helping us understand and treat memory disorders such as post-traumatic stress disorder.”

McGaugh began studying the link between emotion and memory in the 1960s, when he discovered that giving stimulants to animals immediately after training fostered retention of the new skills. Later, he learned that naturally occurring stress hormones had a similar memory-enhancing effect.

Recently, McGaugh has been studying people with highly superior autobiographical memory to see if differences in brain structure may account for the trait.

“The list of previous Grawemeyer Award for Psychology recipients is remarkable,” he said. “It’s an honor to be included.”

Five Grawemeyer Award winners are being named this week. The University of Louisville presents the prizes annually for excellence in music composition, ideas improving world order, psychology and education; it confers a religion prize jointly with Louisville Presbyterian Theological Seminary. This year’s awards are $100,000 each.

UCI’s Elizabeth Loftus, Distinguished Professor of social ecology and professor of law, received the Grawemeyer Award for Psychology in 2005.

James McGaugh’s seminal work on emotion and memory has been featured on popular television programs such as CBS’s “60 Minutes,” described in dozens of textbooks, and cited about 31,000 times in more than 15,000 professional papers.

McGaugh joined UCI in 1964, a year before classes began. Over the ensuing decades, he served as executive vice chancellor, vice chancellor of academic affairs, dean of biological sciences and department chair, in addition to founding and directing the Center for the Neurobiology of Learning & Memory.

UCI named McGaugh Hall after him in 2001 and also awarded him the UCI Medal and established a neurobiology & behavior graduate research award of excellence in his name.

A former president of the Association for Psychological Science, McGaugh is a member of the National Academy of Sciences, the Society for Neuroscience, the International Brain Research Organization, the American College of Neuropsychopharmacology, the Society of Experimental Psychologists and the World Academy of Art & Science.

He also is a fellow of the American Academy of Arts & Sciences.

About the University of California, Irvine: Founded in 1965, UCI is the youngest member of the prestigious Association of American Universities. The campus has produced three Nobel laureates and is known for its academic achievement, premier research, innovation and anteater mascot. Led by Chancellor Howard Gillman, UCI has more than 30,000 students and offers 192 degree programs. Located in one of the world’s safest and most economically vibrant communities, it’s Orange County’s second-largest employer, contributing $4.8 billion annually to the local economy.

Media access: Radio programs/stations may, for a fee, use an on-campus ISDN line to interview UC Irvine faculty and experts, subject to availability and university approval. For more UC Irvine news, visit news.uci.edu. Additional resources for journalists may be found at communications.uci.edu/for-journalists.