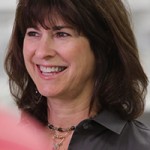 UC Irvine neurobiologist Leslie Thompson is one of two UC Irvine researchers named a 2013 fellow of the American Association for the Advancement of Science (AAAS). Election as an AAAS Fellow is an honor bestowed upon AAAS members by their peers.

Thompson, a professor of psychiatry & human behavior and neurobiology & behavior, was selected for her distinguished contributions to the Huntington’s disease field – particularly relating to mechanisms underlying the cause of the disease – to medical school teaching and to HD-related professional societies. Thompson is the 134th researcher from UC Irvine to be named a AAAS fellow.

This year, 388 members have been awarded this honor by AAAS for their scientifically or socially distinguished efforts to advance science or its applications. This year’s AAAS fellows will be formally announced in the AAAS News & Notes section of the Nov. 29 issue of the journal Science. New fellows will be presented with an official certificate and a gold and rosette pin on Feb. 15 at the AAAS Fellows Forum during the 2014 AAAS Annual Meeting in Chicago.

The other UCI recipient is Qing Nie, professor of mathematics, selected for his work related to the field of systems biology and for developing pioneering educational programs for training students in mathematical and systems biology.

Congratulations to Leslie Thompson for this outstanding achievement!