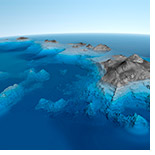 The Hawaiian Islands have long been known as a hot spot for evolution and more recently, as one of the extinction capitals of the world. Professors Ann Sakai and Stephen Weller, Department of Ecology and Evolutionary Biology, have used Schiedea, a Hawaiian plant group that has undergone a spectacular adaptive radiation, as a model system to understand the evolutionary processes involved in speciation of organisms.

With support from the National Geographic Society and the Oahu Army Natural Resources Program, Weller, Sakai, Lauren Weisenberger, Oahu Army Natural Resources Program, and Professor Diane Campbell, Department of Ecology and Evolutionary Biology, are investigating the pollination biology of S. kaalae and other Schiedea species. Many species of Schiedea have evolved wind pollination in dry windy environments, and other Schiedea species in very wet environments have evolved self-pollination, but little was known about insect-pollinated species until recently.

Several years ago, hundreds of Schiedea kaalae were established in the Wai`anae Mountains on Oahu by Lauren Weisenberger (then at the University of Hawaii) to study the effects of varying levels of genetic variation on fitness. Prior to her work, this species was near extinction, with only 30 individuals known in the wild. Weisenberger noted that tiny moths appeared at dusk and visited flowers of S. kaalae, probing for nectar. We now know that the moth visiting S. kaalae is a new species in a very poorly known genus native only to Hawaii.

The research team’s investigation includes measuring the effectiveness of these moths as pollinators, testing whether moths prefer to visit hermaphroditic over wind-pollinated species with separate sexes, and determining whether moths promote hybridization via gene flow between species. The discovery of moth pollination of Schiedea kaalae suggests the potential importance of habitat protection and restoration in maintaining critical interactions between plants and their pollinators in Hawaii. Until recently, no insect pollinators of Schiedea had been documented despite production of floral fragrances and the secretion of nectar at the ends of tiny specialized hypodermic syringe-like extensions of the nectaries.