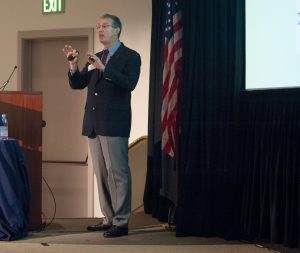 The Biological Sciences School has made it a top priority to host frequent educational lectures to share cutting edge research that address the grand challenges facing our society.  On May 10th, the Biological Sciences School and the Allergan Foundation co-hosted the first Allergan Lecture of 2016 featuring Distinguished Professor of Molecular Biology and Biochemistry, Anthony A. James.  Professor James’ lecture, entitled “Gene Drive: Rules of the Road,” introduced the audience to the complex concept of genome editing using his revolutionary new malaria-resistant mosquito as a reference.  Professor James’ research also has implication for fighting the Zika virus.

Professor James began by proposing an exciting new way of communicating difficult scientific concepts to non-scientists.  He told the audience that a successful scientific talk should be formatted in a manner such that every slide answers a proposed question of the audience.  For his lecture, Professor James was kind enough to provide the questions for the audience at the top of each slide.  He then continued with his lecture on the concept of genome editing and the revolutionary CRISPR-Cas9 technology that he and his colleagues used to generate a new malaria-resistant mosquito.  Professor James was both clear and concise as he described the CRISPR-Cas9 technique that was utilized to introduce a unique set of genes, which coded for antibodies against the malaria parasite, into the germline of the mosquito Anopheles stephensi.

Professor James concluded his talk with a discussion on what was needed to bring his new mosquitoes into the wild to help fight malaria.  He outlined the many steps it would take to demonstrate the safety of the mosquitoes, from simple laboratory tests, to small- scale trials in isolated areas.  He also discussed the many roadblocks at the regulatory level facing his invention, and the steps needed to address concerns that governments around the world have about the technology.