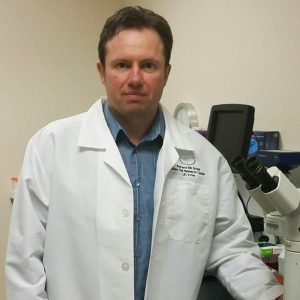 Melanoma is a type of skin cancer with high metastatic potential.  Its survival rate is high if removed before metastasis, however, the survival rate drops sharply once signs of metastasis are found.  Using new and innovative immune-therapeutic approaches, Professor Alexander D. Boiko, Molecular Biology and Biochemistry, discovered that blocking the cell surface protein, CD47 (known as a “don’t eat me” signal), on melanoma cells, increased the degree by which these cells were phagocytosed, or “eaten,” by macrophages.  The team further discovered that blocking CD47 in combination with a second cell surface protein, CD271, resulted in virtually complete inhibition of metastases arising from human melanoma tumors transplanted in mice.  The results give hope that the addition of dual CD47/CD271 antibody therapy to existing immune targeting treatments will provide an important component to the cancer immunotherapy treatment regiment, which will hopefully translate into a more effective outcome for patients.

The cell surface protein CD47, was found to be overexpressed by metastatic melanomas, which helps them avoid being eliminated by the organism’s immune system. CD271, on the other hand, had been previously shown by Boiko to mark a cell population in melanomas responsible for tumor initiation and metastatic spread of this aggressive cancer. For the current study, Boiko and his team conjectured that metastatic melanomas relied on the overexpression of both proteins to fool the immune system and spread to other areas of the body.

“While further research is needed to determine the full anti-metastatic properties of the dual CD47/CD271 antibody therapy and the safety of its application in human patients, combining this therapy with other emerging treatments that also modulate the immune system represents a new approach that may offer increased benefit against metastatic melanomas,” said Boiko.