Home Newsletter New Insight into the Cause of Alzheimer’s 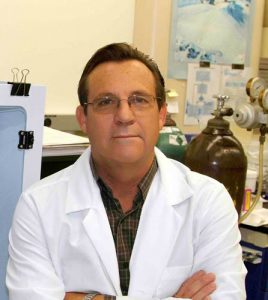 Created to disseminate knowledge about the cutting-edge research being performed at the Biological Sciences School, the Dean’s Distinguished Lecture Series has featured some of the School’s top faculty since its inception.  On May 25th, Professor Charles G. Glabe, Molecular Biology and Biochemistry, gave an insightful lecture titled “Alzheimer’s Disease and the Flip Side of the Amyloid Hypothesis,” introducing the audience to his alternative theory on the cause of Alzheimer’s.

Professor Glabe began his talk with a short introduction on the proteins and enzymes hypothesized to cause Alzheimer’s disease (AD).  The focus of his talk was on a type of protein known as amyloid.  This unique protein is known to form aggregates in many different diseases and its involvement in AD is describe by the “Amyloid Hypothesis.”  In AD, a specific type of amyloid, ß-amyloid (Aß), is believed to be the trigger of the disease.  Professor Glabe has worked on Aß for over 20 years and has uncovered new insights into its pathophysiology within the AD brain.  Professor Glabe presented the novel findings of he and his colleagues on the mechanisms that govern Aß aggregation.  Professor Glabe also described how the Amyloid Hypothesis has guided the creation of AD treatments over the past decade, and how misinterpretations of the hypothesis may underline the poor performance of AD drug candidates in clinical trials.

Professor Glabe concluded his talk with a discussion on a new way to interpret the Amyloid Hypothesis.  Rather than focusing on the secretion of soluble Aß as a disease trigger, as was the case in the previous interpretation of the hypothesis, Professor Glabe’s data suggests that a failure of secretion, and therefore subsequent retention of Aß, is what triggers the disease. Professor Glabe noted that more data is needed before his new hypothesis gains more acceptance, but he has hopes that the data will ultimately speak for itself.