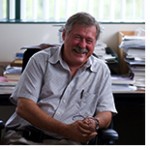 On December 12, Michael T. Clegg, Ph.D., Bren Professor of Ecology and Evolutionary Biology, will be celebrated after a distinguished career in research, academic administration and international science diplomacy. Dr. Clegg retired in June, 2014. Throughout his extensive research career, Dr. Clegg has been a pioneer in using DNA sequencing technology and sophisticated statistical methods to understand evolutionary processes. His research prominence earned him election to the National Academy of the Sciences in 1990 and to the American Academy of Arts and Sciences in 1992. Dr. Clegg’s distinguished career has also included being named Guggenheim Fellow and President of both the American Genetic Association and the Society for Molecular Biology & Evolution. Over the past 12 years, Dr. Clegg has served as the Foreign Secretary of the National Academy of the Sciences where he has contributed greatly to the international scientific community.

The son of a UC Davis professor, Dr. Clegg joined the US Army as a paratrooper after high school. After his military service, he attended Sacramento Junior College and UC Davis as a part time student while working to support his young family. Eventually he earned his Ph.D. from UC Davis in 1972. During his Ph.D., Dr. Clegg made fundamental contributions toward understanding the influence of natural selection on plant populations, using wild barley as a model.

Immediately thereafter, Dr. Clegg joined the faculty at Brown University, where he studied aspects of evolutionary theory using fruit flies as a model organism. After another move – to the University of Georgia in 1976 – he began his work on the evolution of flower color in morning glories, a topic he pursued for the rest of his career. Given the opportunity to return to the University of California, Dr. Clegg took a position at UC Riverside in 1984. At UCR, he contributed to fundamental advances in plant genetics. He established methods to study relationships among plant species using DNA sequences, and he also contributed basic insights about the levels and patterns of genetic diversity in plant species. He joined the faculty of UC Irvine in 2004, where he has studied the history of barley domestication and developed molecular tools to aid avocado breeding.

Dr. Clegg’s career has extended beyond research into administration and scientific diplomacy. At UC Riverside, he served as Dean of the College of Natural and Agricultural Sciences for six years. In his role as Foreign Secretary of the National Academy of the Sciences, Dr. Clegg has invested substantial time and energy into the international scientific community, both by enhancing communication among scientific societies and by supporting governmental investment in the sciences. In other international efforts, he has been elected to Scientific Academies in Argentina, Mexico, Cuba, Palestine, and also to the Academy of Sciences of the Developing World.

On December 12, the School of Biological Sciences, with the Department of Ecology and Evolutionary Biology, will hold a symposium to congratulate Professor Clegg on his retirement. The full-day symposium will feature a renowned slate of speakers, all of whom have worked with Dr. Clegg throughout his prominent career.