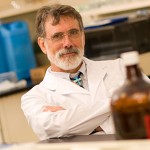 Irvine, Calif., Feb. 4, 2014 — Bruce McNaughton, one of the foremost experts on the brain mechanisms underlying memory storage and cognition, has joined the UC Irvine School of Biological Sciences as a Distinguished Professor of neurobiology & behavior.

He joins three other biological sciences faculty members with the Distinguished Professor title — one of the campus’s highest academic ranks — and is one of only 28 campus-wide to receive this designation.

“It’s a great honor to recruit such a prominent scholar as Dr. McNaughton,” said Frank LaFerla, the Dean of the School of Biological Sciences. “His recruitment adds to the rich and strong tradition of neuroscience research at UC Irvine, and many investigators on campus are looking forward to collaborating with his laboratory.”

McNaughton’s work integrates theory, computational modeling and technological development to decode the neural mechanisms of learning and memory, and his research contributions have significantly advanced the understanding of memory. Much of his research program is founded on the idea that to truly fathom cognition, one needs to study neural “population codes” that can only be understood by recording the activity of many neurons simultaneously.

McNaughton has been a pioneer in the development of technologies to enable the study of these neural codes for memory. Prior to his breakthrough work, it was impossible to take readings simultaneously from large numbers of neighboring neurons.

McNaughton comes to UC Irvine from the University of Lethbridge in Alberta, Canada, where he was a professor of neuroscience. He was the first recipient of the Alberta Heritage Foundation for Medical Research’s Polaris Award, the largest biomedical sciences research grant in Canada ($20 million over 10 years). Before his appointment at Lethbridge, he was on the faculty at the University of Arizona from 1990 to 2008. McNaughton has also been awarded other high-profile prizes during his career, including a Jacob Javits Neuroscience Investigator Award from the National Institute of Neurological Disorders & Stroke and a MERIT Award from the National Institute of Mental Health.