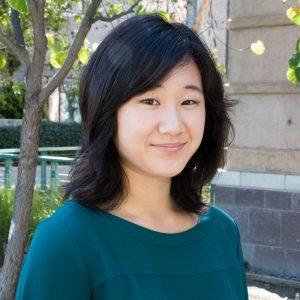 Christine Liu is a third year student at the Biological Sciences School majoring in Immunology and Microbiology, with a minor in Film and Media Studies in the School of Humanities.  Christine is exceling in her studies at the School and has plans to pursue a career in medicine following graduation.

Christine is a UCI Regent’s Scholar, which is one of the most distinguished merit scholarships awarded to entering students by the University of California.  Additionally, she has received campuswide honors for her academic work during her time at the Biological Sciences School.  In addition to her studies, Christine has dedicated her extracurricular time to the pursuit of several training activities, including undergraduate research.  Christine conducts research in Professor Reginald M. Penner’s Lab (Chemistry) during the academic year at UCI.  Her project focus is on the development of phage-based biosensors to serve as affordable clinical devices to help detect bladder cancer. She also works as a student researcher and clinical assistant in the Pediatrics Endocrine Clinic at the Los Angeles Biomedical Research Institute at Harbor-UCLA in Torrance during the summer.  In 2014, she was named a Summer Fellow for her work investigating a linkage between maternal exposure to Bisphenol A and negative metabolic effects on the fetus, at the Harbor-UCLA Medical Center.

While research is an important part of Christine’s training at UCI, she also continues her life’s passion of volunteering for different medical charities.  For example, Christine has taken trips to Mexico, Panama, and Bolivia to do volunteer work with children’s and women’s health programs.  She has also worked with inmates and migrant farm workers in Mexico, as well as indigenous groups in Panama and Bolivia.  Her work with these groups over the years have helped shape her career path moving forward.  As such, Christine has decided to pursue a medical career with the goal of focusing on conditions that disproportionally affect the Latino community.

In pursuit of her goal, Christine has become a member of the Health Scholars Program here at UCI.  As a member of the program, she serves as a Health Navigator at the UCI Family Health Center in Santa Ana, connecting patients to community resources.  In addition, she works as a volunteer at the ALMA Science Academy in Santa Ana, which encourages local children to enter science technology engineering and math (STEM) fields.

Lastly, when Christine isn’t studying or volunteering at a local charity, she enjoys analyzing films and creating videos. She has used the talents learned doing one of her favorite hobbies, to produce videos to fundraise and raise awareness for causes in Latin America.  One project has involved creating health educational videos for children in a diabetes and obesity prevention and treatment program at Harbor-UCLA.

“My volunteer trips to Latin America have greatly shaped my perspective of the world and the role of medicine in helping the poor and vulnerable. I hope to become a physician after graduating from the Biological Sciences School and practice in underprivileged Latin communities. Hopefully, I will have the opportunity to treat patients, conduct research, and educate about diseases that disproportionately affect Latinos.”