Discovery of circadian clock in mice hair reveals period of time when damage from radiotherapy can be quickly repaired, keeping hair intact

Study completed in partnership with the Salk Institute and USC 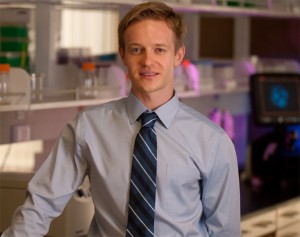 Photo on homepage: Maksim Plikus, assistant professor of developmental and cell biology at UCI and the study’s first author, next to graduate student Raul Ramos, also a co-author on the paper.

LA JOLLA, CA—Discovering that mouse hair has a circadian clock – a 24-hour cycle of growth followed by restorative repair – researchers suspect that hair loss in humans from toxic cancer radiotherapy and chemotherapy might be minimized if these treatments are given late in the day.

The study, which appears in the early online edition of the Proceedings of the National Academy of Sciences (PNAS), found that mice lost 85 percent of their hair if they received radiation therapy in the morning, compared to a 17 percent loss when treatment occurred in the evening.

The researchers, from Salk Institute for Biological Studies, the University of Southern California (USC) and the University of California, Irvine (UCI), worked out the precise timing of the hair circadian clock, and also uncovered the biology behind the clockwork – the molecules that tells hair when to grow and when to repair damage. They then tested the clock using radiotherapy.

“These findings are particularly exciting because they present a significant step towards developing new radiation therapy protocols that include minimizing negative side effects on normal tissues, such as hair or bone marrow, while maintaining the desired effects on cancer cells,” says Maksim Plikus, assistant professor of developmental and cell biology at UCI and the study’s first author. “We will now apply our findings to design novel circadian rhythm-based approaches to cancer therapy.”

The scientists can’t say their findings will directly translate to human cancer therapy because they haven’t yet studied that possibility. But they say it is becoming increasingly clear that body organs and tissues have their own circadian clocks that, when understood, could be used to time drug therapy for maximum benefit.

The Plikus lab is supported locally by the Allergan Foundation.  If you are interested in learning more about how to support research conducted by Dr. Plikus or another faculty at Bio Sci, please contact Andrew DiNuzzo at adinuzzo@uci.edu.

Graphic below visually shows the findings 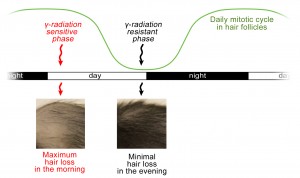