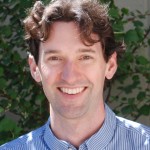 A research team that included Steven Allison, associate professor of ecology & evolutionary biology in the School of Biological Sciences, has found that warmer temperatures shorten the lifespan of soil microbes, and this may affect how soils store carbon. Their study appeared in Nature Climate Change on
September 7, 2014. Study leaders from Northern Arizona University measured two key characteristics of soil microbes that determine their role in the soil carbon cycle: how efficiently they use carbon to grow and how long they live. They found that higher temperatures make microbes grow faster, but they also die faster. Soil microbes consume organic carbon compounds in soil, use some of it to make more microbes and release the rest to the atmosphere as carbon dioxide.

To explore what these new findings could mean for soil carbon storage in a warming world, the team compared output from a soil model that includes the effect of temperature on microbial lifespan to models that don’t. “Models are used to predict how soil processes change, for example, in response to climate change,” said Allison, who developed and ran the mathematical model to show what effect their empirical results could have on carbon sequestration in the soil. “If we want to predict the future correctly, we’d better use models that accurately describe these microbial processes.” The study concludes that incorporating this new insight into soil models will improve our understanding of how soils influence atmospheric carbon dioxide levels and global climate.